Apple's popular Home Mini will now be available in orange, yellow, and blue colors. Earlier it was only available in white and dark gray color options. 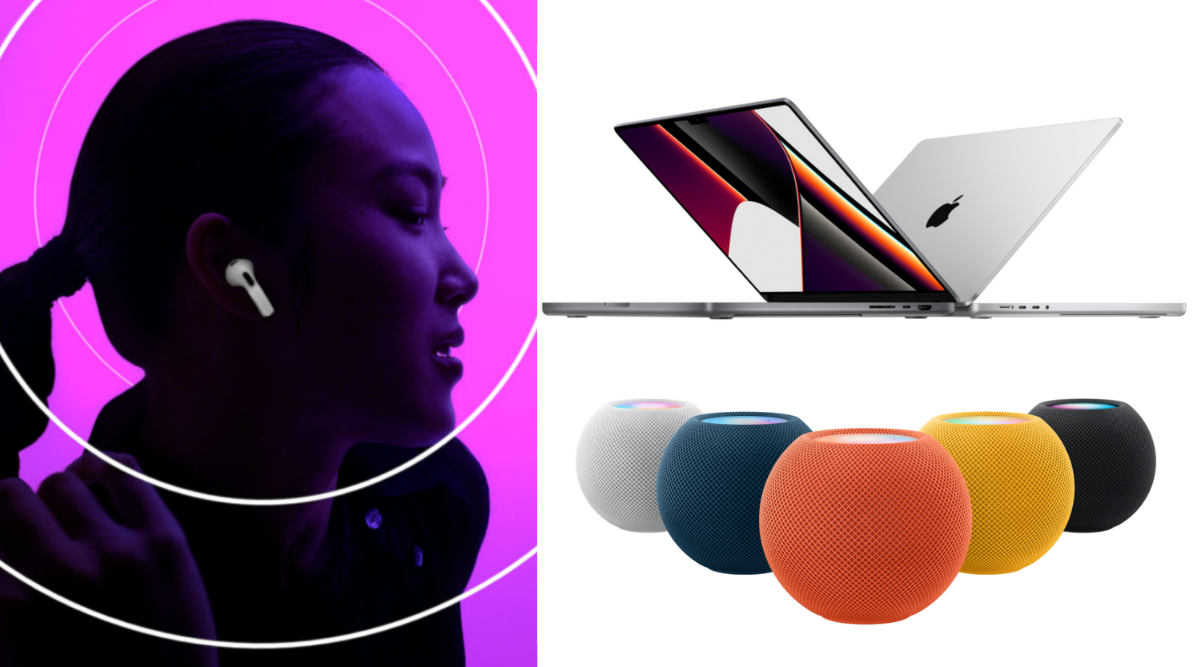 Apple announced several new products on Monday (October 18, 2021). Among them are the new MacBook Pro laptops in particular, which have come with beefier M1 Pro and M1 Max processors and updated designs. The event (held on Monday) will help the American tech giant show off its high-end, professional-grade computers the ability to run their own processors instead of Intel processors. Since the past year, Apple has been replacing the Intel processors inside its Macs with its own processors. The tech giant also revealed the third generation AirPods, which have an AirPods Pro-style redesign. But they do not have Active Noise Cancellation (ANC).

New M1 Pro and M1 Max Chips: Apple unveiled it’s new M1 Pro and M1 Max processors for the new MacBook Pro. The new M1 Pro chip, as Apple points out, has twice the width for its memory interface, 200 GB/s memory bandwidth, and three times the performance of the M1 chip. Built on a 5nm architecture, the M1 Pro supports up to 32GB of memory, which is twice as much as the M1 chip. It has a 10-core CPU, made up of eight performance cores and two high-efficiency cores, making it 70 percent faster than the M1. Meanwhile, the M1 Max has 57 billion transistors, 64GB of RAM, and a 32-core graphics processor. Apple says the new chip is up to seven times faster than PC laptops with peak performance.

New MacBook Pro Laptops: The US company announced new MacBook Pro laptops powered by its M1 Pro and M1 Max chips. It comes in two sizes, which are 14 and 16 inches. The new model features a Pro-Motion 120Hz Liquid Retina XDR display, with new Mini LED technology, an HDMI port, and an SD card slot. It uses a MagSafe magnetic connector, a 3.5mm headphone jack, and a Thunderbolt 4 USB-C port. The Touch Bar is gone, replaced by Function keys.

iPhone 12 price cut before the launch of iPhone 13, know the new price

Below, you’ll find a new Force Touch trackpad. For the first time ever, Apple is bringing a cutout at the top of the screen for its cameras. Coming to the webcam, the new MacBook Pros feature a 1080p FaceTime camera with a larger image sensor for 2x low light performance. They also have six speakers, including two new tweeters that are twice as large.

The new 14-inch MacBook Pro starts at Rs 194,900, while the 16-inch MacBook is priced at Rs 239,900. These are available in both Silver and Space Gray color options and can be pre-ordered from October 19, 2021. These will be ready for release next week. Apple also announced that the next version of its macOS software, macOS Monterey, will be rolling out as an update starting Monday, October 25.

AirPods 3: As previously rumored, Apple has finally announced the third generation AirPods. The new AirPods are closer in design to the high-end AirPods Pro but lack the rubber in-ear tip. They support Spatial Audio and charge magnetically using MagSafe, Apple’s magnetic charger. The company says that it’s AirPods 3 has a more powerful base than the previous model. The new AirPods have a battery life of six hours.

Also, they have a new force sensor for better touch control. They also have Adaptive EQ, which first debuted on the AirPods Pro. The AirPods 3 are also sweaty and water-resistant. The new AirPods are priced at Rs 18,500 and will hit stores by next week. Meanwhile, Apple’s entry-level AirPods now cost Rs 12,900.

HomePod Mini in new colors: Apple’s popular Home Mini will now be available in orange, yellow, and blue colors. Earlier it was only available in white and dark gray color options. The new color options will help boost sales of the HomePod, which competes with Amazon’s Echo smart speaker this holiday season.

Announcement of Rs 49 voice plan for Apple Music: The American tech company announced a new tier of Apple Music called the “Voice Plan”. It costs Rs 49 per month, aimed at Spotify. The basic difference between the Voice plan and Apple’s current Personal plan is that users can only access it through Siri, but lack spatial audio and other premium features.

Also Read: Apple will launch iPhone 13 today, you can watch live events sitting at home, know what time it is