Researchers develop air-purifier made of plants

The challenge of increasing pollution to human health is becoming increasingly difficult. 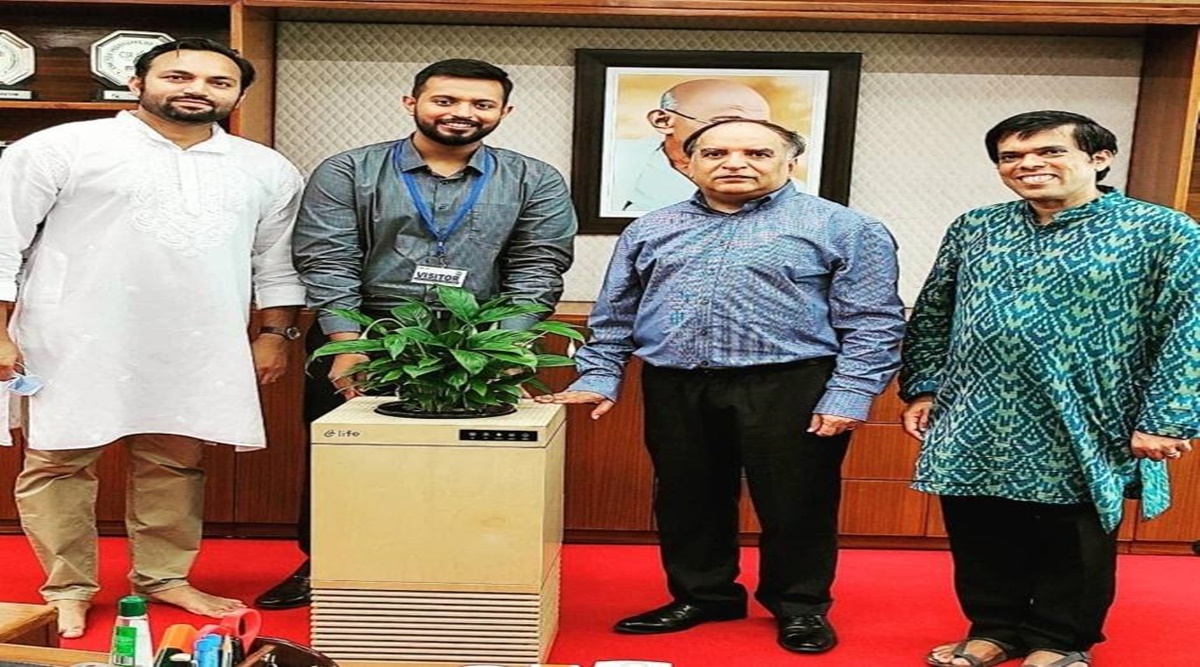 The challenge of increasing pollution to human health is becoming increasingly difficult. New research is being done to avoid pollution-borne diseases, including efforts to purify water, food, and air. The Indian Institute of Technology (IIT) Ropar and the Faculty of Management Studies at Kanpur and Delhi University has developed a living-plant-based air purifier called ‘Ubrid Life’. This purifier is able to extend the process of air purification in less ventilated places such as hospitals, schools, offices,s and homes.

IIT Ropar’s startup company ‘Urban Air Laboratory’ has developed this air purifier. It is a designated Agriculture and Water Technology Development Hub (Ihub-AWADH) by the Department of Science and Technology, Government of India. According to the startup, this is the world’s first, state-of-the-art ‘smart bio-filter that can purify and freshen the air you breathe. This technique works to purify the air through the natural leafy plant.

Room air interacts with the leaves and moves to the soil-root zone where maximum pollutants are purified. The ‘Urban Munnar Effect’ and another new technology ‘Breathing Roots’ from IIT Ropar have been used in this purifier. These techniques can accelerate the phytoremediation process. Phytoremediation is a process by which plants effectively remove pollutants from the air. Peace lily, snake plant, spider plant etc. have been included in the testing of this air purifier.

‘Ubrid Life’ is a filter assembled in a specially designed wooden box. Equipped with specific plants and UV disinfection and pre-filter, this air-purifier qualitatively improves indoor air quality by removing gaseous and organic pollutants through charcoal filters and high-efficiency air particulates i.e. HEPA. This also increases the level of oxygen in the inner chamber. The fan located in the center of this structure spreads the purified air around (360 degrees) by applying pressure. Several specific plants were tested for air purification in this study. They mainly include Peace Lily, Snake Plant, and Spider Plant. The encouraging point is that all of them have given good results in purifying the internal air.

It is believed that the air inside a building, that is, the internal surroundings, is relatively more polluted. Lack of proper ventilation i.e. easy movement of air is also considered to be a major reason for this. In this case, a report by the World Health Organization (WHO) says that indoor air can be five times more polluted than outdoor air.

This aspect becomes more worrisome during the Corona pandemic, as more and more people are being expected to stay in their homes and only go out when needed. That is why recent research published in ‘The Journal of the American Medical Association (JAMA) has advised governments to change the design of buildings to improve the hourly air change. According to the institute, ‘Ubrid Life’ could be the solution to this concern. This tested product ‘Ubreath Life’ can prove to be effective in maintaining clean indoor air.

This research also shows that COVID-19 vaccination cannot guarantee safety in workplaces, schools, and even fully air-conditioned homes unless air filtration, air purification, and indoor ventilation become part of the building’s design. Go. The test results, conducted by the National Accreditation Board for Testing and Design Laboratories and the laboratory of IIT, Ropar show that the AQI (Air Quality Index) is for a room size of 150 square feet.

Professor Rajeev Ahuja, Director, IIT, Ropar says that after using ‘Ubrid Life’ the AQI level drops from 311 to 39 in 15 minutes. Professor Ahuja has expressed confidence that this world’s first living plant-based air purifier could prove to be a game-changer.

Sanjay Maurya, CEO, Youbrief Life, says that this product also has some biophilic benefits, such as it supports cognitive function, physical health, and psychological well-being. Thus, it gives the impression of a small forest in the room. The consumer does not need to water the plant regularly, as it has a built-in reservoir with a capacity of 150 ml which acts as a buffer for the requirements of the plants.

Also Read: Japan increased the world’s worries! The nuclear plant will release one million tons of dirty water into the sea

Share
Facebook
Twitter
Pinterest
WhatsApp
Telegram
Previous articleCorona positive even in the Shastri RT-PCR test, will not be with the team in the Manchester test
Next articleThe secret behind the ant’s steely teeth revealed